A downloadable game for Windows, macOS, and Linux

Trankill - Some play for fun, others play to live.

Juni’s life revolves around a virtual reality fighting game named Trankill. She is one of those people for which Trankill is more than a hobby or a sport, it’s a job. The only one she can have. She and her fellow refugees from the now destroyed island of Silen, are shunned by society and forced into solitude. For far too long she has ignored her past and been content with surviving day to day.

One day she hits “Accept” on a notification from Trankill, now all these people are appearing in her life. Maybe they have answers to questions she didn't know she has. 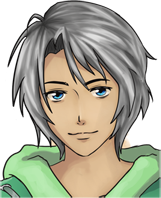 “I must have a soft spot for stubborn brats.”

Following a law that required all Silener kids to be enrolled in Calycan schools, Juni met her first and only local friend. Riley is a hard working kid and Juni’s personal chef, but can get a bit possessive and whiny if left alone. Is against Juni’s “job”. 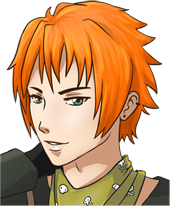 “Finally you acknowledge my talents.”

A bold young man with a talent for magically appearing when least wanted. He accidentally discoverers Juni is also a TK player and his interests just happened to align with hers. Or did they? 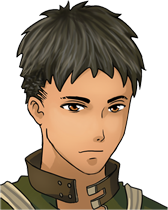 “Domina doesn’t play fair, why should I?”

A smart and mysterious fellow Silener and highly skilled TK player. Patriotic to the core and motivated to uncover the truth about the bombings that wiped out his home. 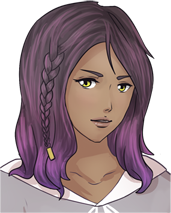 Harley’s partner in crime. Quick-witted and sharp-tongued, Senna won’t accept anything less than perfection from anyone, including herself. You’re not here to pick up boys are you?

“You have no idea how much of you they own.”

A mysterious hacker who has a surprising connection to Juni.

I love it,  the full game is still going to be released?

Is the full game still going to be released? I'm completely in love with it so far so I really hope so

Hopefully so, I am just one person working on it, with a full time job so that's why development is slow. Sorry! :(

Yay! That's okay, it is worth waiting for <3

This demo is amazing. The story is so unique and interesting. I love all of the characters.  I was so sad when the demo ended. It  was a longer length  than most but I was so enraptured in the story it hurt when it stopped lol I've never wanted to date all guys all at once in a story before but this one got me. I went straight for Kiran in the beginning but happily switched  him for Harley with no regrets. Riley is cute as hell and I might even have a thing for DJ weirdly. I know DJ is the bad guy but he is very intriguing.I'm usually really big on music as well but this story stood on it's own. Can't wait to see how music enhances it. Thank you for making this!

I'm happy to hear you had a good time playing the demo and especially that you liked all of the guys <3  I really wish I could have custom music made for the game, but I'll have to see if that's possible. I'd love for every main character to have their own theme song... *proceeds to daydream*

I played the demo and enjoyed it vey much! The characters are hilarious and original. It's one of the longest demos I've played, and I love it. So, I would really be interested in the release date. I hope I'm not obnoxius. I wish luck on your future projects, and I will be very happy if you would take your time to reply to this comment.

Hey, there! Don't worry about it, I am glad you cared enough to ask about a release date, hehe. Unfortunately  I don't have one planned since making visual novels is just a hobby, so I work on it in my free time.  I don't have a strict schedule, the perks of working by myself :D

Well, I'm glad you enjoy making these visual novels! I would honestly be sad when you would be unhappy. So, good luck! Know that you have people's support. (Ehh, don't want to sound cheesy) ;D

AHH!!!  That was my reaction when I realized that you had a new and sizable demo out!

I really liked all the characters.  I'm trying to pick a favorite for you, but I think it's impossible.  Riley is great as the friend-turned-love-interest (which is not a type that I usually enjoy, but that I always love in your games.)  Harley is adorable in his awkward stoicism, and Kiran is hilarious.  His route is definitely the funniest so far.  And I love Senna!  I love that she doesn't seem to be a rival, but instead a potential friend.  As far as DJ goes... we shall see.  I am very curious about him, but he hasn't exactly made a good impression.

I was pleasantly surprised that the story was so involved.  Your previous games (err the ones I've played) have been excellent, but very slice of life.  I wasn't expecting the plot to suck me in so deeply- I forgot it was a demo and was very sad when I suddenly ran out of story!  Great cliffhanger btw, I'm pretty much exploding over here.

I am curious, how much of the game was that?  It was a pretty long demo!

I really am so happy to have something new from you to play, I love how you write and your sense of humor is the best  Thank you and keep up the good work!~

Thanks for playing Tranquil and it seems some of my other games! I've been wanting to write something a bit more than slice of life and I hope I am ready to take on this challenge.  I know it was a pretty long demo, but I wanted the players to have a chance to get to know the characters a bit.  The demo is about 60% of what I have written so far and something like 30-40% of the whole game I have planned.

You noticed the little "caaaake" reference I snuck in during the birthday party! I can die happy! =)))

I'm definitely not complaining about the length, I had lots of fun.  And I am very happy to hear there will be so much more to play when it's finished!

The consistency of the characters' trait is pretty much appreciated, as it moves the story in rational and plausible way of future environment with its political and social conflicts. The flow of emotions from seriousness to cute even comical one is well-polished through their dialogues (but the still monotonous expression on the characters' faces is slightly uncomfortable ^^; )

Just hope that the state bar has its own menu, so that it doesn't cover up the graphic part of story, and keep up the good work (^_^)9

Thank you so much for sharing your thoughts.  The sprites are a work in progress, I personally find I don't pay attention the expressions after a while when reading visual novels, but I totally understand that it's strange that the character is yelling in the story, but smiling in their sprite :P

Not sure what you mean by state bar? If you're talking about the relationship/attribute points then they will definitely be presented differently somewhere down the line, probably in the form of progress bars that aren't on the screen at all times. Right now I decided to show them  as they are so that the player can see the effect of their choices even if in an unfinished form.

Yeah, I meant the relationship and attribute point (in my opinion) will be inconvenience if showed at the right corner of the novel. Pardon me if the term "status bars" isn't familiar, it's my reference to any visual novels and text-based games which using similar point or rating system ^^;

And it's a pleasure to hear the recent progress and plan you have made, wish you all the luck to finish the project thoroughly (>w<)/

This was....really good. I'm trying to think of where to start. I didn't know what to think when I started playing but the story is really strong. When I read your blog and saw that you were inspired a bit by Togainu no chi I COMPLETELY see it. I think that's why I like the storyline/aesthetic so much but I think what you've thought of has its own thing going on too. (More cohesive than TNC gets so far)

I definitely laughed multiple times during different parts of the demo.

When it came to all the different characters all the designs are cool and I didn't really know who I'd check out first so I just went with Harley because I wasn't expecting much and I usually get super interested in the secret side type characters like Thea  but after playing through each guy's 'route' at least twice Harley is my favorite, completely caught me off guard.

Riley is likeable too but I enjoyed Harley's scenes the most especially the birthday one, it was really sweet. (I also like Kiran but he's not my fav LI wise, I'm not about that wishy-washy carefree troublemaker life so I'd probably play him last). I'm still interested in DJ but his birthday scene was too short to gauge much from.

Speaking of birthday scenes I loved the little items shown throughout the demo, I usually don't care either way if we visually see what the items in game look like since that's more of an easter egg like treat but I was blown by the graphics and design of yours (jewelry and cake, how could I not be captivated?) I don't know what program you used but it was a pretty addition I appreciated.

I can't think of what else to say other than the mechanics for the game, the point system for the characteristics and relationships, is interesting and I'm curious to see just how much it effects gameplay. This might have not been a complete demo but it was an effective one I enjoyed a lot so thanks!

Thank you so much for the in depth review! I am so happy that you liked it enough to even play it more than once. Usually people play it once and don't even get any of the bonding/romantic scenes scenes because they try to get on everyone's good side lol.

DJ gets more scenes later on, although maybe not as many as the main three since he appears a bit later. I am expecting Kiran to be the most popular since everyone wants to change the bad boy, but I am glad you liked Harley most.  :)

Reading your comment made me that much more motivated to work on the game! Thank you again so much! ^_^ 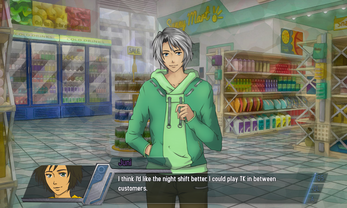 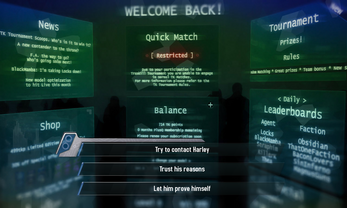 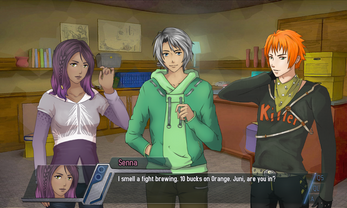 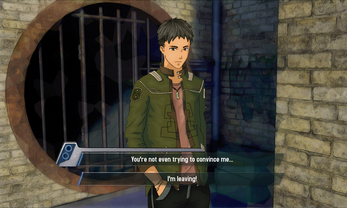 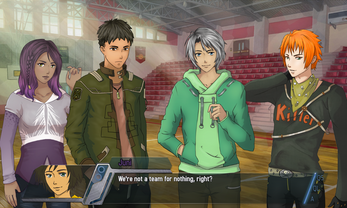